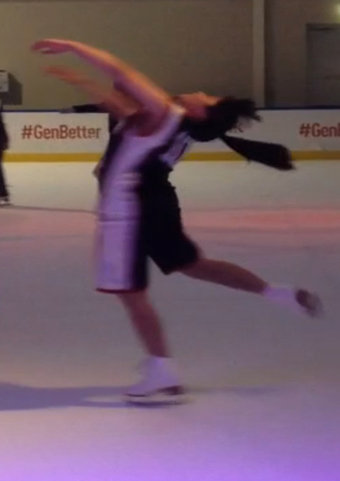 Mara Isabel Santos was born on March 2, 1998. The first time she wore ice skates was when she was in the Philippines for a holiday in 2008. She was an ordinary 10-year-old girl who got excited after seeing an ice skating rink within the SM Mall of Asia in Manila. Mara then wanted to apply for figure skating lessons but unfortunately, there were no nearby skating rinks close to her home. Finally, during 2011, Mara found out about the Medibank Icehouse. She enrolled in the Icehouse's skate school and began her lessons. Now 17 years old, Mara had passed her test for Freeskate 4 and currently training to take her Preliminary test.

Her nearest rink is the O'Brien Group Arena (previously called Medibank Icehouse), locating in Docklands, Australia.
Even though she was only 12 turning 13 at that time, Mara wanted to learn to figure skate for the fun of it. She knew it was too late for her to join the Olympics, but at least she can still participate in competitions.
Mara, so dedicated in her training, practiced moves that were high for her level. When she was in Novice 2, she saw a friend practicing the Waltz jump and tried it out herself. Now, her Waltz jump needed a little more practice but she was able to get it ready for Freeskate 1.

Mara now passed Aussie Freeskate 4 and working on her loops, Lutzes, backspins (all positions), change of foot and many more. Learning that self teaching can only develop bad techniques, Mara stopped learning things on her own and decided to wait until time is right until she could learn a new element. She has also participated in the Medibank Icehouse's Christmas Show on Ice 2012.